Amongst the many duties of prophet-hood assigned to Nabi (Sallallahu Alayhi Wasallam), one of his duties was to verbally explain as well as physically demonstrate to the ummah the details and particulars of the shar’ee laws contained in the Noble Quran. Allah Ta’ala says:

And We have sent down the Qur’an (the reminder) to you so that you explain to the people what has been revealed for them, and so that they reflect. (Surah Nahl 16/44)

For example the Noble Qur’an declares:

If one has to study the Quran in depth he will not find any details mentioned of the five faraaidh; viz. Fajr, Zuhr, Asr, Maghrib and Esha nor will he find the exact number of the rakaats for each Salaah. Other related aspects such as the sunan, wajibaat, faraidh, or the factors which invalidate or decrease the spirit of the Salaat are also not mentioned. One will be compelled to refer to the Sunnah [1] for these details since it is in reality a commentary of the Quran. Similar is the case of Zakaat, Saum, Haj and the remainder injunctions of shariah. Hence we understand that following the Ahadeeth of Rasulullah (Sallallahu Alayhi Wasallam) is akin to obeying Allah Ta’ala, as mentioned in the Ayah:

Nabi (Sallallahu Alayhi Wasallam) himself directed our attention to this point in the following Hadith:

Furthermore it is impossible for one to understand all the verses of the Qur’an without the agency of the Ahadeeth of Rasulullah (Sallallahu Alayhi Wasallam), even though he may be a Sahabi (the first recipient of the Qur’an).

When the following verse of the Holy Qur’an was revealed:

And eat and drink until the white thread of dawn appear to you distinct from its black thread. (Surah Baqara 2/187)

Hadhrat Adi Ibn Hatim At-Tai (Radiyallahu Anhu) tried to apply his personal intellect in understanding the intended meaning of the verse and hence reached an erroneous conclusion. Subsequently he expressed what he understood before Rasulullah (Sallallahu Alayhi Wasallam). Rasulullah (Sallallahu Alayhi Wasallam) corrected him and explained the correct meaning of the verse.

Imam Sha’bi reports that Hadhrat Adi ibn Hatim (Radiyallahu Anhu) related to me that when the above verse of the Qur’an was revealed. I took two pieces of threads (one thread was black and the other white). I then placed both the treads beneath my pillow. I stared at the threads for a long time expecting to see the white thread becoming more clear and visible from the black thread so that I may then abstain from eating. However, the entire night passed and in the morning I came to Nabi (Sallallahu Alaihi Wasallam) and I had expressed what I had understood from the verse and what I had done during the night. Nabi (Sallallahu Alaihi Wasallam) smiled and remarked: “If the meaning of the verse is as you have understood, then your pillow is indeed very wide. For indeed the white and black threads implied in the verse refers to the brightness of the day and the darkness of the night.” [2] 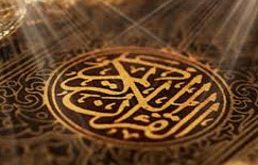 Reciting any Surah of the Qur’an before Sleeping

The Intercession of the Qur’an