The Importance of Subscribing to the Correct Aqaaid The deen of Islam, with all its pillars, rests on the foundation of faith and correct beliefs. If the beliefs of a person are corrupt, then even though he may strive to carry out pious and righteous deeds, he will not receive the promised rewards, as his beliefs, which are the basis of his deeds, are corrupt.

If the beliefs of a person contradict the fundamental beliefs of Islam, he will not even be regarded as a believer, even though he outwardly appears to be a believer and carries out the rituals of Islam with the Muslims.

In regard to the one whose beliefs are corrupt, Allah Ta’ala explains in the Holy Qur’aan:

“The deeds of those who deny their Lord are like ashes blown away by the wind on a stormy day. They will not gain anything (reward of the good works) of what they earned. That is the furthest point of straying away from the right path. (Surah Ebrahim, Aayah 18)

In another verse of the Qur’aan Majeed, Allah Ta’ala says:

“Say: Shall We inform you of those who are the greatest losers in terms of their deeds? (They are) those whose efforts have been wasted in this life while they thought that they were acquiring good by their deeds. They are those who used to deny the aayaat (proofs, verses of the Qur’aan Majeed and the signs of Allah Ta’ala) of their Lord and the meeting with Him (in the Hereafter). So their deeds are in vain, and on the Day of Resurrection, we shall assign no weight for them (for the good deeds they did in the world). That shall be their recompense – Jahannum – because they disbelieved and took My signs and My Messengers as means of jest and mockery. (Surah Al-Kahf, Aayah 103- 106)

From the above verses, we conclude that without Imaan, one will not be a believer.

Imaan is to believe in the fundamental tenets of faith such as the oneness of Allah Ta’ala and believe in all His attributes, the finality of the prophethood of Hazrat Rasulullah (sallallahu ‘alaihi wasallam), the prophethood of all the Ambiyaa (‘alaihimus salaam), the existence of the angels, the revelation of all the divine scriptures, the belief of taqdeer (predestination), the occurrence of the Day of Qiyaamah and life after death, the existence of Jannah and Jahannum, etc.

If one merely performs salaah, discharges zakaat, fasts in the month of Ramadhaan, performs haj, etc., but he does not bring Imaan in the fundamental tenets of faith, he will not be regarded as a Muslim. Therefore, it is imperative for one to study Islam correctly and learn the fundamental tenets and beliefs of Islam so that one may become a true believer and acquire the promised rewards through one’s good deeds, as well as the closeness and proximity of Allah Ta’ala. 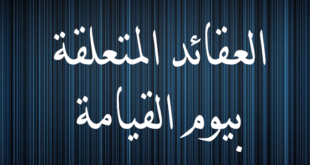 Beliefs regarding the Day of Qiyaamah

1. The Day of Qiyaamah will take place on a Friday. This will be the …