Generally people are forgiven due to one of two reasons:

It is reported, when the wife of Haroon Ar-Rasheed, Bibi Zubaida (Rahmatullahi Alayhima) learnt of the hardships and difficulties the people of Makkah as well as those coming for Hajj and Umrah were undergoing due to insufficient water provisions and sanitation. She immediately instructed that a huge canal be constructed covering the vase distance between Iraq and Makkah, thus providing water for the creation. This canal remained the main source of water for approximately one thousand years. We can well imagine the multitudes of people that drank from the canal of Zubaida.

After her demise, she was seen in a dream and questioned as to how it faired with her in the grave. She replied: “Al-Hamdulillah, Allah Ta’ala has forgiven me.” She was then asked whether the reason for her forgiveness was the canal she constructed. She replied: “Though I was instrumental in the construction of the canal. However, the public funds were used for accomplishing this great task.” She then related that once while I was seated for meals and about to place the morsel of food in my mouth when the Muazzin called out the Azaan. I realised that the front part of my hair was slightly revealed. So I immediately placed the morsel of food on the plate and out of respect for the Azaan covered my hair. It was on account of this action that Allah Ta’ala forgave me.

“Those who show respect to the symbols of Allah Ta’ala, this is indeed a sign of the piety of the hearts. (Surah Hajj 22/32) 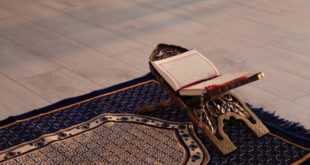