Reciting Tasbeeh-e-Faatimi after every fardh salaah On one occasion, the poor Sahaabah (radhiallahu anhum) complained to Rasulullah (sallallahu alaihi wasallam) saying, “O Nabi of Allah (sallallahu alaihi wasallam), as far as the wealthy among your Sahaabah are concerned, then they perform salaah and we also perform salaah, they observe nafl fast and we also observe nafl fast, so in that respect we are equal. However, with regards to spending wealth in the path of Allah Ta’ala, since they are endowed with wealth from the side of Allah Ta’ala, they are able to free slaves and generously spend in the path of Allah Ta’ala whilst we are unable to do so. Hence, we are deprived of the great merits and abundant rewards received through giving alms for the cause of Deen.”

Nabi (sallallahu alaihi wasallam) then taught them the tasbeeh-e-Faatimi, exhorting them to recite after every fardh salaah, 33 times ‘Subhaanallah’, 33 times ‘Alhamdulillah’ , 34 times ‘Allahu Akbar’ and 10 times ‘Laa ilaaha illallah’ (at the end) . Nabi (sallallahu alaihi wasallam) then told them that if you recite this tasbeeh you will surpass those before you, and those after you will not be able to reach your status and position. There will be no one more superior to you except those who also practice upon this.

Nabi (sallallahu alaihi wasallam) replied, “This is the bounty of Almighty Allah Ta’ala. He grants it to whomsoever He pleases.” 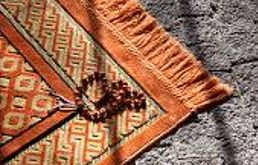 Reciting Tasbeeh-e-Faatimi before Retiring to Bed